The esplanade and the port 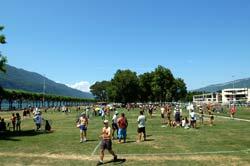 With its snack bars, pétanque pitches and play areas, the large and leafy park of the esplanade is a favourite place for a stroll for locals and visitors alike.

A long promenade runs along the lakeshore from the Petit Port to the Grand Port, from where it continues along the «Chemin des Digues». This shady, tree-lined and traffic-free avenue is an ideal place for a gentle walk to admire the views across the lake to the Montagne de l’Epine.

Aix-les-Bains is France’s second largest spa resort. In 2006, 34,000 people took advantage of the healing and relaxing treatments offered by the city’s spas, and the «Thermes Nationaux» is the city’s second biggest employer. The spas’ personalised treatments, strict organisation, short and targeted cures, dual-objective treatments (health and well-being), and qualified and multi-skilled personnel, make Aix-les-Bains THE destination for well-being and revitalization.

The hot and curative springs on the slopes of Mont Revard were first discovered by Celtic knights. Then, in around 120 BC, the Romans provided the town with the sort of comfortable baths that were so fashionable throughout the Empire, attracting the patricians of Roman Gaul to take the waters. They first went into a hot bath (caldarium), then into a warm bath (tepidarium), and then into a cold bath (frigidarium). All the pools were made of marble and the column-lined rooms were heated by circulating hot air from a central furnace under the floors: a system known as a hypocaust. The remains of the Roman baths can still be seen inside the Thermes Nationaux. This bathing tradition was conserved through the centuries, attracting many other famous visitors including Henry IV, who, in 1600, «bathed for an hour» in the only bath still accessible, called the Royal Bath. In later centuries, the nobility could bathe at home in hot spring water delivered by porters. However, most patients bathed in the caves where the sulphur and alum-rich waters emerged. In the 19th century a tunnel was dug into the rock to allow the water to flow to the surface. The waters owe their 46° temperature to their underground voyage from the opposite shore of the lake, during which they spend more than 30 years at a depth of 2000 m.

Since the spring of 2004, the Chevalley site of the Thermes Nationaux has had a Wellness Centre. The 1600 m2 Wellness Centre is exceptionally well equipped, with two swimming pools, one inside filled with hot spring water, and one outside filled with fresh water. The pools have hydro-jet beds and seats, whirlpool baths, counter-current and multi-jet pools and waterspouts. Saunas, hammams and a fitness centre complete this architectural jewel.